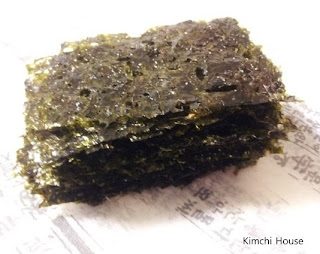 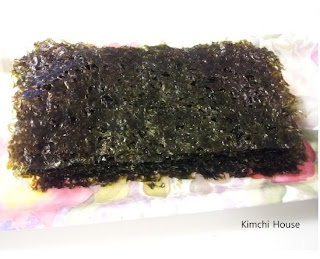 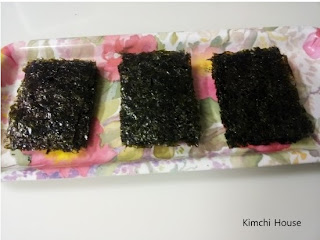 As what I know, many foreigners they like to buy "김/Kim/紫菜" when they visit Korea. This "Kim" are roasted with sesame oil, sprinkled with salt and cut into squares. In fact, both the roasted "kim" and original dried "kim" are available in the market in Korea.


Gim (김), also spelled as kim in Korean.  In Welsh this food is called laver and in Japanese, nori.

Gim is known to be abundant in protein and vitamins, especially vitamins A, B1, B2, B6, and B12. It is also known to have a high content of mineral salts, particularly iodine and iron, and essential amino acids and properties that dispose of cholesterol, earning its reputation as a "healthy food".


As natural collection of gim wasn't enough to meet demand, various new cultivation techniques developed between the 17th century and 19th century, mostly in the Gwangyang bay region. Although posts and woven frames made from bamboo are traditionally used in cultivation, nets of synthetic fiber are also used in modern times.
Gim is known to grow well in sea water between 5 °C and 8 °C, so gim collection is usually done between December and January. Gim that has been grown for 50 days is considered best for consumption, as the color and flavor are at their best. Cultivation is done mostly in the regions of South Jeolla and South Gyeongsang, with the gim from Wando being the most famous.


There are many legends about the etymology of the word gim. One version explains that an old lady in the region of Hadong discovered a log covered in gim floating down the Seomjin River, which inspired her to cultivate gim on upright bamboo support poles. Another legend says that the word "gim" was named after its creator, Kim Yeo-Ik (김여익), who lived in the island Taeindo during the reign of King Injo, who was the first person to have cultivated gim after seeing a drifting oak branch covered in it.[3] Although the true origins of the term, gim are unclear, there are records dating from the 17th century of Kim Yeo-Ik cultivating gim. There is a monument in Taeindong, Gwangyang set up in his honor for these achievements.
（source: wikipedia)

1. Pour the perilla oil or sesame oil in a small dish, use a brush to dip the oil and brush on the surface of the dried "kim". Repeat the same process for all the sheets.

2. After brushing the oil on the surface of the dried "kim", sprinkle the salt on each sheet too.

4. Use the scissors to cut the size as you wish.

Email ThisBlogThis!Share to TwitterShare to FacebookShare to Pinterest
Labels: Vegetable

Dear Readers,
Thanks for your support for the past one year, I appreciate you all very much.
This is only a place for me to write down the recipes,
I am more active on Facebook under the name of " Kimchi House"
https://www.facebook.com/house.kimchi
(Please click the album instead of photo on my Facebook )
Kimchi House All the copy rights reserved 版权所有版把版权權所有 All Rights Reserved